When Jesus came into the region of Caesarea Philippi, He asked His disciples, saying, Who do men say that I, the Son of Man, am? So they said, Some say John the Baptist, some Elijah, and others Jeremiah or one of the prophets. Matthew 16:13,14

Identity is one of the major topics of the Bible, even though it is not addressed as such in any particular passage. This must be why Jesus wanted to know who the people thought He was. They realized that He was someone special, but didn’t know who He really was; some thought He was one of the Old Testament prophets. Then Jesus asked the same question to His disciples:

He said to them, “But who do you say that I am?” Simon Peter answered and said, “You are the Christ, the Son of the living God.” Jesus answered and said to him, “Blessed are you, Simon Bar-Jonah, for flesh and blood has not revealed this to you, but My Father who is in heaven. Matthew 16:15-17

Peter had the right answer: He was the Christ, the Son of the living God — revelation knowledge imparted to Him by the Holy Spirit. This revelation, Jesus added, is the rock on which He would build His church, and because of its strength, not even the gates of hell would prevail against it.

And I also say to you that you are Peter (Greek: petros= rock or stone), and on this rock (Greek: petra = a rock, cliff or ledge) I will build My church, and the gates of Hades shall not prevail against it. Matthew 16:18

A name is not enough information to accurately identify a person, which is why Jesus has many names and several titles — all of which describe His person, His position, His authority, and His assignment.

For unto us a Child is born, unto us a Son is given; and the government will be upon His shoulder. And His name will be called Wonderful, Counselor, Mighty God, Everlasting Father, Prince of Peace. Isaiah 9:6

Jesus is our unfailing, unchanging, and unshakeable rock. He is the same yesterday, today and forever — the cornerstone that stabilizes the church through troubling times. We, the twice born, have nothing to fear!

Now, therefore, you are no longer strangers and foreigners, but fellow citizens with the saints and members of the household of God, having been built on the foundation of the apostles and prophets, Jesus Christ Himself being the chief cornerstone, in whom the whole building, being fitted together, grows into a holy temple in the Lord, in whom you also are being built together for a dwelling place of God in the Spirit. Ephesians 2:19-22

There is a shadow in the Old Testament with rich meaning for us in the church era. When the Israelites journeyed through the desert on their way to the Promised Land, God instructed Moses to strike a rock with his cane, and life-giving water flowed out of it. (Exodus 17:5,6) The Israelites did not understand the fulness of what happened there, but the apostle Paul writes about it in this way:

Moreover, brethren, I do not want you to be unaware that all our fathers were under the cloud, all passed through the sea,  all were baptized into Moses in the cloud and in the sea, all ate the same spiritual food,  and all drank the same spiritual drink. For they drank of that spiritual Rock that followed them, and that Rock was Christ. Romans 10:1-4

That rock that Moses struck is a shadow of Jesus’ side pierced by the Roman soldier, causing water and blood to flow from it. This is what brought life to us who are weary of walking through the spiritual pollution of a broken world, as the old hymn so beautifully describes:

Rock of Ages, cleft for me,
Let mew hide myself in Thee
Let the water and blood,
From Thy riven side which flowed,
Be of sin the double cure,
Save me from its guilt and power.

After that the Israelites faced another drought, in the wilderness of Zin, but this time God told Moses to speak to the rock:

Take the rod; you and your brother Aaron, gather the congregation together. Speak to the rock before their eyes, and it will yield its water; thus you shall bring water for them out of the rock, and give drink to the congregation and their animals.” Numbers 20:8

The rock was cleft only once, just as Jesus died only once. All you now have to do to receive His life-giving gift, is call on Him:

For “whoever calls on the name of the Lord shall be saved.” Romans 10:13

…that if you confess with your mouth the Lord Jesus and believe in your heart that God has raised Him from the dead, you will be saved. Romans 10:9

Jesus doesn’t have to die every time you sinned, just confess it to Him:

If we confess our sins, He is faithful and just to forgive us our sins and to cleanse us from all unrighteousness. 1 John 1:9

For such a High Priest was fitting for us, who is holy, harmless, undefiled, separate from sinners, and has become higher than the heavens; who does not need daily, as those high priests, to offer up sacrifices, first for His own sins and then for the people’s, for this He did once for all when He offered up Himself. Hebrews 7:26,27

Looking at God’s time table, as it was revealed to king Nebuchadnezzar in his dream about the image, (See Daniel chapter 2) we find ourselves around the time of the feet of iron mixed with clay. In his dream he saw an image of which the head was of fine gold, its chest and arms of sliver, its belly and thighs of bronze, the legs of iron, and the feet of iron mixed with clay. The different sections of his body represented different world empires. King Nebuchadnezzar was the head, Persia the chest and arms, Greece the belly of bronze, and Rome the legs of iron. We already had all of these empires; only the feet of iron and clay remains — the last global empire that will rule the world.

A New World Order is about to unfold, as several world leaders of our day already mentioned. They are talking about a global government, consisting of officials appointed by the world’s governments — some strong as iron, some weak as clay. We do not yet know exactly what to expect, but the United Nations and the European Union look like good candidates to form such a government. This will be a brutal regime under the leadership of a charming, eloquent man, also known as the anti-Christ. He will rule for seven years, after which Jesus will come down from heaven to establish His kingdom on earth.

At the end of the seven years, Jesus will stand on the Mount of Olives; (Zechariah 14:4) His coming will be the rock that struck the feet of Nebuchadnezzar’s dream, completely destroying it. Yes, He is going to enter our world once again, this time not as a baby in a manger, but as the Rock that destroys corrupt human government that so proudly and arrogantly breaks God’s laws.

And as the toes of the feet were partly of iron and partly of clay, so the kingdom shall be partly strong and partly fragile. As you saw iron mixed with ceramic clay, they will mingle with the seed of men; but they will not adhere to one another, just as iron does not mix with clay. And in the days of these kings the God of heaven will set up a kingdom which shall never be destroyed; and the kingdom shall not be left to other people; it shall break in pieces and consume all these kingdoms, and it shall stand forever. Inasmuch as you saw that the stone was cut out of the mountain without hands, and that it broke in pieces the iron, the bronze, the clay, the silver, and the gold—the great God has made known to the king what will come to pass after this. The dream is certain and its interpretation is sure. Daniel 2:42-45

Don’t become discouraged when you see corruption washing over our world. Jesus warned us that there will be deception in the last days, as we now indeed see every day. And it will get worse for a while as things continue to deteriorate, but cheer up, our redemption is drawing close. Remind yourself that we are not of this world; our King is on His way to establish His rule, and He will reign in righteousness. As the world spins out of control, and fear fills the hearts of people everywhere, make sure your anchor grips the solid Rock.

Hear my cry, O God; attend to my prayer.  From the end of the earth I will cry to You, when my heart is overwhelmed; lead me to the rock that is higher than I. For You have been a shelter for me, a strong tower from the enemy. I will abide in Your tabernacle forever; I will trust in the shelter of Your wings. Selah Psalm 61:14

Look up, our redemption is drawing close! 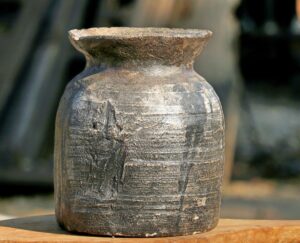 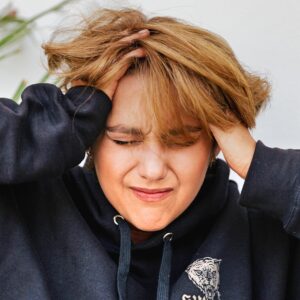