There are times in life that we face a barrage of challenges and issues that have no immediate answers, nor apparent escape, especially when facing worldly situations and working in a world-based environment. Many born again believers, though growing in the faith, spend much time in utter discouragement because the immediate pressure and issue confronting the one, shrouds the view so that one cannot look beyond the situation. Without having to give any detailed examples, I will phrase my items following here in such a way that everyone reading this can put their own life’s scenarios and issues in the appropriate places.

I know that I am not the only one encountering issues that require endurance for a period of time until an expectant promise and outcome is received. Though to endure may be difficult, and sometimes almost unbearable, one can only find stability in drawing closer to God and receiving comfort along with encouragement from Him. Before David became king, he faced an extremely difficult period of time when his city of Ziklag was plundered and burned and blame was put on him.

Moreover David was greatly distressed because the people spoke of stoning him, for all the people were embittered, each one because of his sons and his daughters. But David strengthened himself in the LORD his God. (1 Samuel 30:6)

On reading the rest of the passage mentioned above, we find that David and his people had a successful outcome in a very short period of time.

What about situations when things don’t seem to work out in our favour or credit for a long time? It is obviously much easier to endure when God’s blessings and peoples’ praises are visible. What about when you have done your very best for God and for people, fulfilling the purposes that He has set out for you, and your only reward is that people find fault and criticism with your accomplishments?

Did someone try to chain you by demanding that you do not continue in God’s work (or any other secular work) in the way you have done? And you have been forced to change to methods and ways that run contrary to the principles that have been ingrained into your being over your years of walking closely with God?

Has anyone ever worked hard for God (or any other work), after much sacrifice on your part, God prospered the work your hands, only to find that someone else takes all the credit and honours due to you?

There are many more situations that can be mentioned of things that are not working out as expected? How do we not get entangled with temptation to be bitter, angry, burning up inside of ourselves, nor to get even?

Enduring is part of and a much required feature in our walk here on earth with God. When I listen closely during hard times as described above, I hear a still, small voice coming through, that seems to say “… do you love Me more than these…”

Love for God must be at the root of all to keep you in an enduring position, or should I rather say to remain hooked and anchored onto God requires full trust and love for Him, knowing that in Him lie all the answers and good outcomes.

You therefore, my son, be strong in the grace that is in Christ Jesus.

Suffer hardship with me, as a good soldier of Christ Jesus.

It is a trustworthy statement:

For if we died with Him, we will also live with Him;

If we endure, we will also reign with Him

Also, we can endure by looking beyond our present circumstances and seeing Him who is invisible:

By faith Moses, when he had grown up, refused to be called the son of Pharaoh’s daughter, choosing rather to endure ill-treatment with the people of God than to enjoy the passing pleasures of sin, considering the reproach of Christ greater riches than the treasures of Egypt; for he was looking to the reward. By faith he left Egypt, not fearing the wrath of the king; for he endured, as seeing Him who is unseen. (Hebrews 11:24-27)

If divine love for God is not at the foundation (1 Corinthians 13:7,8) which bears all things, believes, hopes, and endures all things AND NEVER FAILS, we will not be able to do the ‘suffering of the hardships’ part. The endurance part on our behalf comes with great promise:

‘Because you have kept the word of My perseverance, I also will keep you from the hour of testing, that hour which is about to come upon the whole world, to test those who dwell on the earth. ‘I am coming quickly; hold fast what you have, so that no one will take your crown. ‘He who overcomes, I will make him a pillar in the temple of My God, and he will not go out from it anymore; and I will write on him the name of My God, and the name of the city of My God, the new Jerusalem, which comes down out of heaven from My God, and My new name. (Revelation 3: 10-12) 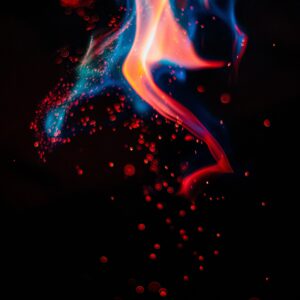